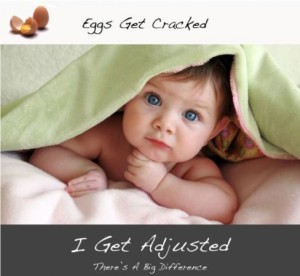 “Why does my child need chiropractic care?” This is most common question I hear when I mention to people that I see kids in the office. It is true that you’ll probably never see your five or six-year-old bend over to pick up a toy and freeze in pain saying, “oh, my back went out again.” Spinal degenerations and vertebral subluxations that cause that kind of pain will generally not appear in children- but it can start there.

Let’s talk about something that every person on the planet has gone through. Whether you are rich or poor, old or young, male or female, we have all experienced birth; some more traumatic than others. The way we enter this world may have an impact on our overall health. Whole books have been written on this subject. Today I will be addressing the physical trauma that newborns go through.

Natural childbirth has come to mean many different things, but for the purpose of this article let’s keep it simple and say that it is a drug-free, vaginal delivery. Even with no pitocin, no epidural, no vacuum or forceps used, childbirth causes stress to a still developing spine. Use of any of the mentioned interventions only adds to that stress and may be compounded by cesarean births.

During delivery the baby’s head is the first to emerge, and the doctor will then help guide the rest of the baby out of the canal. How many times have you heard about, or moms have you felt, the pulling on the baby’s head. I have heard stories where a nurse is holding down the mother while the doctor is pulling the baby out. I hope that is not common practice. With that much tension and force there is bound to be some side effects of the birthing process. Imagine your newborn lying peacefully in the bassinet. If someone were to come and grasp their delicate head and lift them up by it, what damage do you think may be caused? At minimum, you would get a spinal misalignment or a subluxation and possible nerve damage.

Two prominent German MD’s published papers in the late 80’s and did clinical work with newborns and infants to address what chiropractors label upper cervical subluxation. Gottfried Gutmann, MD addressed what he called “Atlas Blockage” and stressed the importance of having the atlas area of infants examined after birth, especially if the birth was difficult (the Atlas is the first bone in cervical spine). He treated over 1,000 infants and documented the positive clinical results derived from correction for “Atlas Blockage” by performing specific light force adjustments to the atlas vertebrae.

Another medical study revealed that due to the physical forces incurred during delivery, 80% of ALL children born exhibited misalignments of their upper cervical spine. Dr. H. Biederman, a German MD, wrote a paper stressing the importance of the neurological structures in the atlas and occipital (base of the skull) areas. Biederman described atlas misalignments is newborns with the term “Kinematic Imbalances due to Suboccipital Strain” (KISS Syndrome). According to Biederman this “blockage” can be corrected by “manual therapy of the suboccipital area of the upper cervical spine”.

Both Gutmann and Biederman specifically attributed these syndromes to the compromised positions that the head and neck of an infant are susceptible to during the birth process.  They concluded that birth injuries to the upper cervical spine are severely under-diagnosed, and therefore under-recognized for their significance. Gutmann further stated that the upper cervical spine should be examined after all births, and adjusted by a Chiropractor if necessary.

If 80% of all births result in misalignments of the upper cervical spine, according to the research, don’t you think it would be a good idea to see if your newborn or child may have one? Unfortunately these subluxation patterns do not self resolve, but continue to affect the nervous system and by extension the whole body. Many childhood health problems are merely the result of nervous system interference, usually along the spine.

I often find an association of nervous system interference with many common childhood health complaints such as; colic, ear infections, unexplained crying, torticollis, asthma, acid reflux, poor appetite, and ADHD just to name a few. By removing the subluxation and nerve interference, the body is then able to develop naturally and self heal.

This is just one of the many reasons why children need chiropractic care, but I think it is the most important reason. If there were a simple, safe and effective procedure to help unsure your child had the best opportunity to start life and grow to their potential, don’t you think they would want you to give it to them? Give us a call so we can make sure your child gets that chance.